We are Still Thrilled by These Wins!

The majority of the ideas we have executed have started up as silly conversations, over lunch, or a coffee break. Rarely on our desks.
49 views0 comments
Creativity Week

Communicating in Africa requires the creation of new references and the Caractère agency has always functioned as an agitator.
94 views0 comments
Creativity Week

It is Very Important that We Shift Our Focus to Identity

At a time like this when things are on the gloomy side globally, it is heartwarming to see creativity being celebrated as Pitcher Festival..
71 views0 comments
Creativity Week

Day Two at the Pitcher Festival

The Pitcher Festival of Creativity continued on 3rd of July 2020. The first session for the day began by 11:00 am with Adebola Williams, CEO, Red For Africa, in his keynote presentation titled “Election Hack- How to Win Elections in Africa”. He guided creative communications practitioners on how to successfully handle an electoral portfolio, with a larger view of helping Africa build its democracy. Adebola stressed the need to present something new to the audience. He said:
29 views0 comments
Creativity Week

Dubai Lynx announces that the Festival of Creativity will no longer take place in September 2020 as planned. New date is 7-10 March 2021.
18 views0 comments
Creativity Week

The United Nations has issued an open brief to creatives around the world to help combat fears and misinformation regarding the COVID-19,
148 views0 comments
Creativity Week

From Africa with Love

Introduction to Pitcher Awards 2019 Winners Showcase By Nnamdi Ndu, CEO CHINI Africa Many Africans, especially those from the bigger countries like Nigeria, get so pained when people from other parts of the world say someone is from Africa or going to Africa. They feel the fact that Africa is a mega continent is lost on them. Indeed, Africa is huge - 54 recognized independent countries with a total land mass of over 30 million Km2. Africa is 3 times the size of Europe and ha
30 views0 comments
Creativity Week

Fighting Back Stereotype with Creativity

The Daring Odyssey of a Nigerian Creative in South Korea By Chris Ogunlowo South Korea. Until now, the Asian country existed in my imagination in patches drawn from movies, her occasional soccer encounters with Nigeria, her joint-hosting of Korea-Japan 2002 FIFA World Cup, the reels of new stories relating her to North Korea, her picturesque depictions in travel documentaries, the one with Seoul as capital, and the cute winking logo on my TV set that sometimes reminds me of i
67 views0 comments
Creativity Week

Winning the FCLA Competition was a Dream Come True

Written by Funke Ademola Aliu Winning the Future Creative Leaders Academy (FCLA) was a dream come true for me. It was a competition I looked forward to since my 200 level, and when the opportunity came and I was nominated to participate in my 400 level I was elated! I registered, the brief came out, I responded, presented, got tutored, won the competition and got the most coveted trip to France, to attend the annual Cannes Lion International Festival of Creativity; the bigges
32 views0 comments
Creativity Week

An Idea that is strong Enough Transcends Language

Jonah Otieno is the the Chief Executive Officer of 5ive ltd, an East African creative and branding services agency. In this chat with Creativity Week, Jonah shares about the ideas behind setting up 5ive, his work and views about creativity in Kenya and Africa as whole. What inspired you in forming 5ive and how has the journey been so far? I did the first Cannes Creative Leaders Programme and when I came back, the agency that I was Creative Director of at the time wasn’t ready
836 views2 comments 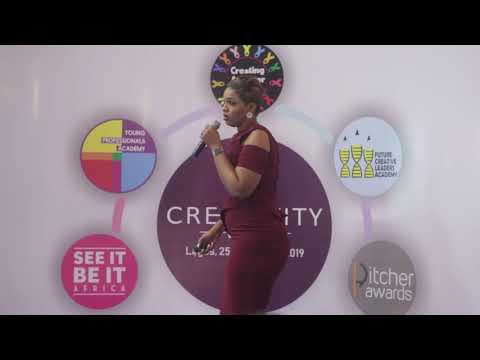 How Can Creativity Be Used to Drive Social Change?

Many creatives usually feel the burden to do something to positively impact society. But, they often feel limited and helpless. In this seminar held during the 2019 Creativity Week as part of the Creating a Better Africa series, Noella Ekezie, Founder/Chief Creativity Officer, Ellae Creative Branding Agency, arms the participants with case studies and other information that can help them take those liberating steps towards making a difference for society. Creating a Better Af
32 views0 comments
Creativity Week

Campaigns are not won by agencies, they are won by brave clients